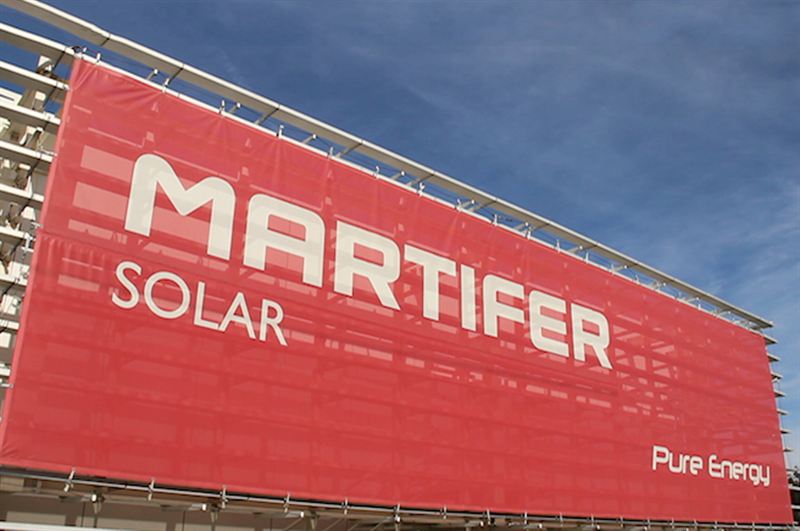 ñ  The company totals almost 110 MW of solar PV projects installed in one year in the UK, including the successful sale of a total of 37 MW to date, fully-developed and commissioned by Martifer Solar

Martifer Solar, a subsidiary of Martifer SGPS, successfully connected 78.4 MWp to the UK grid before the March 31st 1.6 ROC (Renewable Obligation Certificate) deadline. This 78.4 MW cluster consists of five plants and was built for Lightsource Renewable Energy. The construction of the portfolio was completed by Martifer Solar in record timing—time-to-power was only nine weeks, which equates to almost 2 MW installed per day, even under the worst winter rainfall reported in the UK since 250 years.

With this realization, Martifer Solar presents a track record of almost 110 MW of solar PV projects connected in the UK throughout the span of one year. The company has demonstrated a continuous commitment to the development and construction of utility-scale projects in the UK market since its entry in 2011.

“With the successful completion of this 78.4 MW portfolio, Martifer Solar strongly expresses its reliability and capability to overcome assumed project challenges,” said Jo ã o Cunha, Martifer Solar’s Country Manager in the United Kingdom. “Moreover, the implementation of almost 110 MW in one year represents an important milestone for the company as we transition from a strong EPC player to a lead Developer of projects in the UK.”

The total capacity of almost 110 MW added to the grid has been built for Lightsource Renewable Energy, a reflection of the trusted partnership with Martifer Solar in the UK.

Martifer Solar has been targeting its core strengths along the solar value chain in the country, ensuring a leading role as a Developer in the market. To date, Martifer Solar has sold a total of 37 MW of fully-developed and commissioned PV plants, and recently attained Planning Consent for Rydon Farm—an 11 MW site which belongs to the company’s previously announced 50 MW portfolio and will be built under 1.4 ROCs.

The company targets to complete the remainder of development for this portfolio throughout the next several months. In addition, Martifer Solar has begun the development of new portfolio of projects with a total capacity of approximately 100 MW in the UK. The portfolio will be addressed to generate projects to be connected under 1.4 ROCs and 1.3 ROCs.

“The UK was one of our most successful markets in 2013 and is a true representation of Martifer Solar’s successful expansion into a fully-integrated PV player. As we continue working towards our key strategic objectives in 2014, we can expect more milestones and achievements that will reinforce the company’s position as a credible and bankable partner in the PV industry and financial markets,” said Henrique Rodrigues, CEO of Martifer Solar.

In a recent announcement, NPD Solarbuzz upgraded their forecast for the UK PV market to 2.5 GW in 2014 due to stronger than anticipated results in Q4 2013 and an enduring confidence of project developers and investors in the market.

The UK is set to be the strongest European market in 2014 with a projection of approximately 700 – 900 MW of projects to be installed in the first three months. Based on this forecast and with the largest PV portfolio now connected, Martifer Solar predicts a 9 – 11% market share for the first quarter.

Martifer Solar is a fully-integrated player in the global photovoltaic market focused on Development, EPC and O&M Service.

In 2013, Martifer Solar’s revenues reached 274.4 million euros and, to date, the company has implemented 500 MW of photovoltaic solar energy worldwide.

Martifer Solar is part of the Martifer Group, a multinational industrial group with around 3,000 employees focused on metallic constructions and solar energy. Martifer SGPS, SA is the holding company of the Group and has been listed on Euronext Lisbon since June 2007.

Martifer Solar is a fully-integrated player in the global photovoltaic market focused on Development, EPC and O&M Service.The company is based in Portugal and has presence in Europe (Spain, Italy, Greece, Belgium, France, Czech Republic, Slovakia, United Kingdom, Germany, Romania and Ukraine), North and Latin America (United States, Canada, Mexico, El Salvador, Chile, Brazil and Ecuador), Africa (Cape Verde, Mozambique and South Africa) and Asia (India, United Arab Emirates, Singapore and Japan).In 2012, Martifer Solar’s revenues reached 230.8 million euros and, to date, the company has implemented 500 MW of photovoltaic solar energy worldwide.Martifer Solar is part of the Martifer Group, a multinational industrial group with around 3,000 employees focused on metallic constructions and solar energy. Martifer SGPS, SA is the holding company of the Group and has been listed on Euronext Lisbon since June 2007.